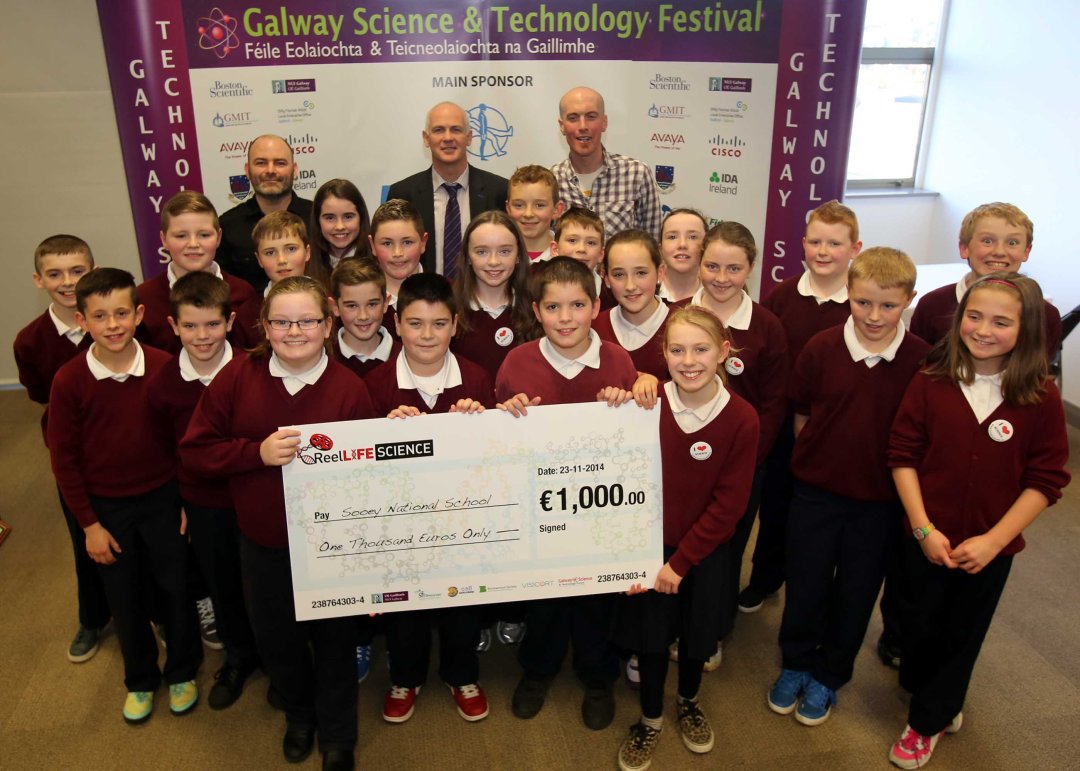 After competing against more than 250 science videos from all around the country, huge congratulations goes to the Fifth and Sixth class students of Sooey National School, Co. Sligo, for their winning Primary school video ‘The Secret Life of Honey Bees’, and Leaving Certificate student Julien Torrades from Summerhill College, Sligo who takes first place in the Secondary school competition for his video ‘The History of Medicine‘.

Both schools win €1000 for their science programme, which will be presented to them at the Galway Science and Technology Festival Exhibition on November 23rd. A further €1250 will be awarded to 5 other prizewinning schools for their entries, and all prizewinning and shortlisted videos listed below will be screened for the public at the Festival.

Judge Aoibhinn Ní Shúilleabháin remarked: “I was astounded by the calibre of the videos from both the primary and secondary schools. It is wonderful to see the thought, preparation, fun, and learning that went into all of the videos and it is very encouraging to see students enjoying and communicating science.”

A massive thank you to all the schools around the country for taking part in this year’s competition and everyone in NUI Galway and beyond who helped make ReelLIFE SCIENCE 2014 such a success! As Co. Sligo schools scooped the main prizes at both primary and secondary level, it’s only fitting we remember the words of W.B. Yeats, who told us (appropriately enough for a Science Communication competition) that we should “Think like a wise man but communicate in the language of the people.” and declared that “Education is not the filling of the pail, but the lighting of the fire.”

Keep the science fires lighting everyone!

‘The Secret Life of Honey Bees’ was produced by Fifth and Sixth class students from Sooey National School, Co. Sligo, with the help of their teacher Thomas Egan. Judge Professor Stephen Curry commented: “Sooey National School’s video had good science content, with a very, very funny script and the kids were clearly having a lot of fun which makes the film hugely appealing.”

‘The History of Medicine‘ was made by Leaving Certificate student Julien Torrades of Summerhill College, Sligo, under the supervision of his Art teacher Jonathan Cassidy. The video was described by Prof. Curry as “a good use of stop-motion…with a nice sense of humour…covering an impressive amount of ground in a short space of time”.

‘ChemKids‘ explores the Science Week 2014 theme ‘The Power of Science’ and was made by all the students (from junior infants to 6th class) of Scoil Eoin, Tahilla, Co. Kerry, with the help of their teacher Doireann Healy.

‘Lise Meitner, the Science Hero that time forgot‘ tells the story of Austrian Physicist Lise Meitner, who many people believe should have shared the 1944 Nobel Prize in Chemistry for her work with Nobel Laureate Otto Hahn on “the discovery of the fission of heavy nuclei.” This video was made by Transition Year students from Rosses Community School, Dungloe, Co. Donegal under the direction of their teacher Michelle Gallagher.

‘All You Need Are Worms’ was submitted by Fourth class students of Rush and Lusk Educate Together National School in Dublin, with the help of their teacher Simon McConkey.

‘Gravity in a Nutshell’ was made by Transition Year students in Causeway Comprehensive School, Co. Kerry, under the guidance of teacher Jennifer Barry.

An additional publicly voted prize, sponsored by Medical Supply Company, is awarded to students of St. Michael’s House Special National School in Ballymun, Dublin 9 who, with the help of their teacher Melanie McInerney, made the wonderful video ‘Trees: Properties and Uses‘.

‘Alexander Fleming – Science Hero’ made by Transition Year students under the direction of their teacher Aideen Lynch from St. Marys School for Deaf Girls, Cabra, Dublin 7.

‘Vision – How We See the World’ produced by Fifth year students with the help of their teacher Hilary Rimbi from St. Andrew’s College, Blackrock, Co. Dublin.