Since launching in 2013, more than 13,000 people have taken part in ReelLIFE SCIENCE, producing over 1,000 STEM videos in 400 schools and community groups around Ireland.

These videos have received more than 270,000 views in over 100 countries and have been featured on RTÉ’s News2Day and TG4’s Cúla4 TV programmes.

Below you can see a summary of each year’s competition, with the winning videos, prizegivings and special guest judges.

You can see a larger selection of videos in our Video Library organised under various themes, such as ‘Energy, Forces, Physics and Space‘ and ‘Our Healthy Bodies‘.

Transition year students, Kalen McDonnell, Noah Lynskey, Jason Doyle, Erin Russell Hughes and Katie Hughes, along with teacher Aideen Lynch from Holy Family School for the Deaf in Dublin, claimed the Secondary School €1000 award, for their short film ‘How Science Helps Us Hear’. Judge Adam Kelly said of the video “I didn’t know much about hearing aids or cochlear implants worked, and this video did a good job of informing me, really enjoyable.” while Joanna Donnelly remarked that “This taught me something new!”

The ‘Green Team’ from Rosses Neighbourhood Youth Project in The Rosses, Co. Donegal, led by Foróige Project Worker Clare Mullan, won the €1000 Community Group first prize for their video about Climate Action, ‘Acting Local, Thinking Global’. Judge Adam Rutherford praised the “Fantastic combination of powerful imagery and commentary” while Joanna Donnelly called the video “Brilliant. These kids were very good. The graphics were super. The explanations were clear. They have a plan to counter the issue and are acting on it. I love these guys!”

The judges selected ‘Science and Me: The Skin‘ by Powerscourt NS from Enniskerry, Co. Wicklow as the best video at Primary School Level, winning €1000. Norah Patten commented that it was “nice to see all of the kids participating. Lots of easy to understand science communicated. Love the Lego part, very easy to understand and well planned. Any age group could watch this and learn something new from it” while Dara Ó Briain commended the “strong involvement from the class” and that there was “loads to learn” from the video.

The animated biopic ‘Rosalind Franklin: A Lesser Known Science Heroine‘ from Loreto Secondary School Kilkenny transition year students, Emer Tobin and Katherine Morrow, claimed the CÚRAM-sponsored first prize at Secondary School Level. The video was described by Dara Ó Briain as “A really good topic, beautifully presented” while Simon Meehan was “delighted that Dr Franklin’s work was brought to light in this manner and given a chance to be publicly recognised.”

Lackagh Foróige group member Sean Janson demonstrated the ‘Science of Smashing’ with equations, experiments and “tons of personality” to win the CKI-sponsored first prize at Community Level. Norah Patten praised Sean for “trying to put some maths and science to smashing. Great job on front of the camera!” while Dara Ó Briain liked that the science on screen is “experimental science. It’s repeatable, properly explained and has tons of personality!”

The judges selected ‘How the Immune System Works‘ produced by the 25 fifth and sixth class students of Sooey National School in Sooey, Co. Sligo, under the direction of teacher Thomas Egan. No strangers to the competition, Sooey NS also claimed first place back in 2014. Judge Amber Gell described the video as “very creative and entertaining!” and commented that “The students clearly had a blast filming this video and teaching about the concepts. That enthusiasm and understanding was well-conveyed and came across to the audience.”

The video ‘The Death of Paul Donovan‘ produced by Fourth Year students from Davitt College in Castlebar, Co. Mayo under the guidance of teacher Fiona O’Connor, claimed the CÚRAM-sponsored first prize at Secondary School level. Described by Prof. Luke O’Neill as “very funny and original“, the video also impressed Shane Curran who said “The anecdotal style and storyline is very engaging. A lot of work done in preparation of the story and the techniques used in forensics.”

‘The Immune System Simplified‘ produced by members of the Corofin Foróige Group claimed the first ever CKI-sponsored First Prize at Community level. The video’s distinct animation style impressed all of the judges, with Amber Gell commenting “Very creative use of prop work. Did an exceptional job addressing the science using an appropirate medium in an informative yet entertaining manner. Well thought-out video, outstanding job!”

The judges selected ‘Life in Space – An Saol sa Spás!’, produced by 4th class students of Gaelscoil Riabhach (Loughrea, Co. Galway) under the direction of teacher Brian Ó Meacháin, as the best primary school video, and deserving winners of the €1000 first prize. Described by Maria Louise Fufezan as “a really inspiring video that successfully communicated the wonders of life in space” the students interviewed NASA astronaut Colonel Ron Garan about his experiences aboard the International Space Station. 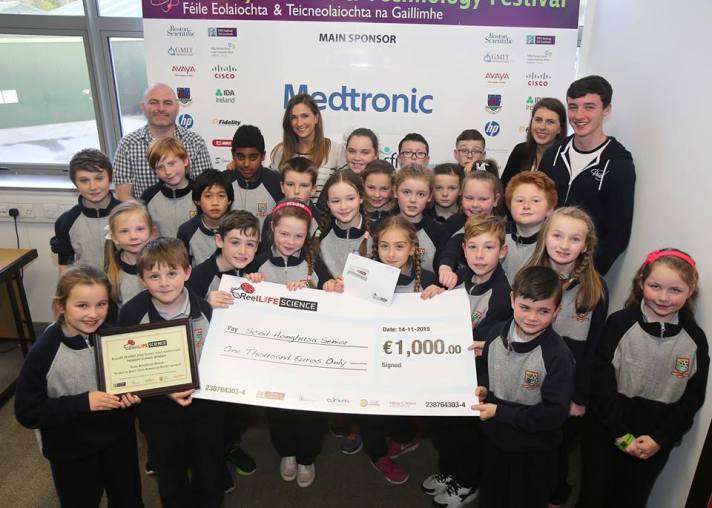 The judges selected ‘Scoil Aonghusa Rocket Launch’, produced by 4th class students of Scoil Aonghusa Senior, Tallaght, under the direction of teacher Jennie Smith, as the best primary school video, and deserving winners of the €1000 first prize. The video, a news report live from Tallaght’s first manned rocket launch, was described by Cmdr. Hadfield as “fun” and “well-acted”, while Prof. McLysaght praised the “humour interspersed with the science,” remarking that “This video is great fun and I think the pupils had fun making it too!”

The 2015 secondary school competition saw Causeway Comprehensive School, from Causeway, Co. Kerry, improve on 2014’s third place finish by claiming the CÚRAM-sponsored €1000 first prize, with a video entitled ‘The Mystery of Light’. With guidance from science teacher Bridget Buckley, the filmmakers, fifth year students Solas O’Halloran and Matt Tyrkiel, were hailed as “engaging hosts” by Cmdr. Hadfield, while he described their video as being “cool, clearly explained” and “dramatically filmed.” 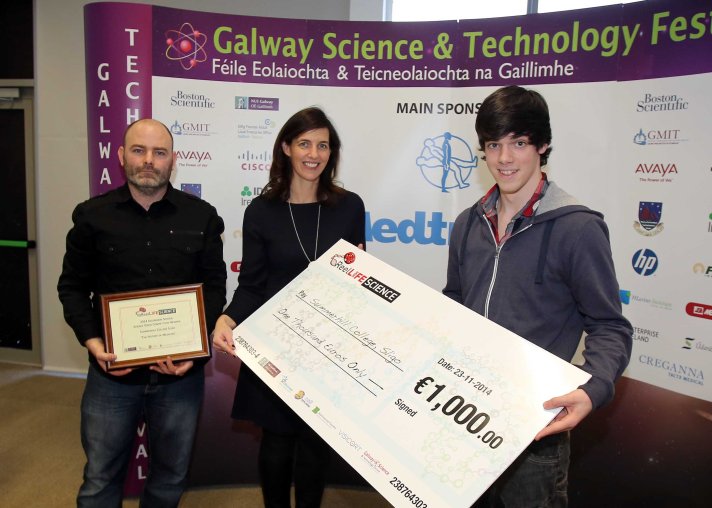 ‘The History of Medicine’ was made by Leaving Certificate student Julien Torrades of Summerhill College, Sligo, under the supervision of his Art teacher Jonathan Cassidy, winning the Primary School first prize of €1000.. The video was described by Prof. Curry as “a good use of stop-motion…with a nice sense of humour…covering an impressive amount of ground in a short space of time”. 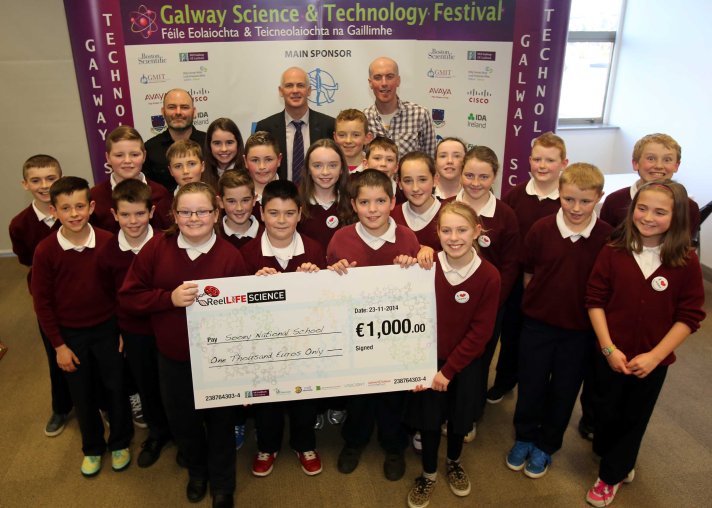 ‘The Secret Life of Honey Bees’ was produced by Fifth and Sixth class students from Sooey National School, Co. Sligo, with the help of their teacher Thomas Egan, winning the Primary School first prize of €1000. Judge Professor Stephen Curry commented: “Sooey National School’s video had good science content, with a very, very funny script and the kids were clearly having a lot of fun which makes the film hugely appealing.”

In first place at Secondary school level, under the “Astrobiology” category, we have a stunning video called “Life in Space” created by the multi-talented St. Enda’s College Transition Year student Michael McAndrew, under the direction of Mr. Fahey and Mr. Conroy. This remarkable film combines a fantastic concept and animation style with an intelligent script, wonderful delivery and original score. The film describes the fascinating field of Astrobiology, encompassing the origin and future of life on earth and the search for extraterrestrial life in other “Goldilocks Zones”. The simple yet effective cartoon style could conceivably be used to explain a range of different scientific topics, and the ReelLife Science team can’t wait to see more of Michael’s excellent work. In Michael’s own words “it is very exciting what the future might bring us“.

In first place at Primary school level, under the “Habitats” category, we have a video as Gaeilge about Seed Dispersal called “Scaipeadh siolta i Rosmuc”. This memorable video was made by the 5th and 6th class students in Scoil Mhuire Rosmuc, under the direction of their teacher Ms. Ni Chonaola. The wonderfully produced video comes with an extremely impressive script, to which Ms. Ni Chonaola was kind enough to provide an English translation for non-Irish speakers. The students took a very specific topic in Seed Dispersal and Germination, and produced three very amusing and informative sketches demonstrating different methods of dispersal. Furthermore, they performed some experiments of their own on the various seeds they found, identifying the different traits associated with them, based on their method of dispersal.