The winners of ReelLIFE SCIENCE 2020 have been announced at the first ever virtual Galway Science and Technology Festival as GAELSCOIL RIABHACH from Loughrea, Co. Galway at primary school level, ALEXANDRA COLLEGE from Milltown, Dublin 6 at secondary school level and THE RIPPLE EFFECT YOUTH HUB from South County Dublin at youth group level.

Winning videos were selected from a record 450 entries made by over 2,500 participants in 130 schools and youth groups around Ireland, by a panel of judges including broadcaster and teacher ‘Múinteoir Ray’ Cuddihy from RTÉ’s After School Hub, BBC Wildlife and Children’s presenter, Ferne Corrigan, and the 2020 BT Young Scientist and Technology Exhibition winners, Cormac Harris and Alan O’Sullivan, from Coláiste Choilm in Cork.

ReelLIFE SCIENCE is based in NUI Galway and is supported by the Science Foundation Ireland Discover programme, the Community Knowledge Initiative, the CÚRAM Centre for Research in Medical Devices and the Cell EXPLORERS science education and outreach programme. The ReelLIFE SCIENCE programme challenges young people in schools and youth groups around Ireland to engage with science and technology by producing short educational videos, while developing their communication and digital skills. Since being launched in 2013 by Dr. Enda O’Connell and a team of volunteer scientists, this challenge has been met by more than 16,000 participants in over 500 schools and groups around Ireland.

All prizewinning videos below were screened online for the public at the ‘ReelLIFE SCIENCE Home Cinema‘ as part of the 23rd Galway Science and Technology Festival on Sunday November 22nd, 2020.

The judges selected ‘An Croí’ by Fourth Class students and teacher Briain Ó Meacháin from Gaelscoil Riabhach from Loughrea, Co. Galway as the winner at primary school level, winning €1000. Judge Ferne Corrigan said “I loved the start stop animation for this, it was a very clever way to show how our hearts work and how we need to keep them healthy. The students are very smart and should be really proud of their work” agus dúirt Múinteor Ray “Do bhaineas an-taitneamh as an físeán seo le na páistí as Gaelscoil Riabhach. Bhí an ‘stop-motion’ an-simplí ach an-éifeachtach ar fad! Tá sé soléir go raibh sibh ag fohglaim a lán rud agus go raibh a lán taighde déanta agaibh, go háraithe leis an saineolaí slántiúil sa rang!“

Sixth class students and teacher Sinead McManus from Scoil na Naingeal Naofa, Boyle, Co. Roscommon were runners-up, with ‘Cells in our Bodies’, winning €500. Judge Ferne Corrigan praised this “beautifully produced multimedia video” which “really captures the complexity of human biology. The stop-motion was used to excellent effect, such great communication. I loved the ambition of the project and you worked on a cutting edge area of academic research.”

The winning video at secondary school level was the animated ‘What is Mitosis?’ from Transition Year students Isabelle Xiao and Cindy Xu, along with their teacher Patrick Cushen from Alexandra College, Milltown, Dublin 6, winning €1000. Judge Ray Cuddihy said “This video is fantastic. Brilliant work from Isabelle and Cindy. I loved the animation, voice manipulation and the bedding music. It was so funky and appealing. Combining art and science is an incredible skill. You should be very proud!“.

Year 8 students and their teacher Niamh McGirr from St Patrick’s College, Dungannon, Co. Tyrone were runners-up with ‘An Interesting Matter – Why Ice Melts‘, winning €500. Judge Ferne Corrigan said “The different states of matter explained from above with the students being particles with their umbrellas was just brilliant. A very nice visual explanation on how states of matter can change between solid, liquid and gas. Very clever film!“

John Madeja & Gerard Nipales, students from Le Chéile Secondary School, Tyrrelstown, Dublin 15, along with teacher Sean Creedon, came in third with their video ‘The Anatomy of Basketball‘, winning €250. Judge Ferne Corrigan said “I really like that these students used their passion, basketball, to explain the anatomical structures used when playing it. A really nice way to combine their love of biology and sports in a creative way.”

Brothers Alex and Nathan Wai from The Ripple Effect Youth Hub, Dublin, won at youth group level, with their video ‘Canny Canines: Are dogs smarter than we give them credit for?‘, winning €1000 for the group who run activities for young people with Aspergers, ADHD and Dyspraxia in South County Dublin. Judge Ferne Corrigan said “I love this as an idea, testing the family pet for science! Really clever and that dog is brilliant. Great to have the statistical analysis of Deano’s performance and how they want to expand their testing in the future. Very thorough work from some brilliant canine scientists. What I especially like is that it is bringing science into their homes with their own pets. Makes it very accessible. I look forward to their future work and will have to test some out on my own dog!“

The Easy Treesie group, led by Orla Farrell, which encourages young people to plant trees to combat climate change were runners-up, with their video ‘How to Plant a Tree Sapling; Easy Treesie‘, winning €500. Múinteoir Ray said “This video was joyous. I wanted to join in and go plant a tree with you guys!! What a great crew. Such a healthy and positive thing for you all to share. I’m inspired!“

In third place at youth group level were members of the Foróige – Gort Youth Service, Gort, Co. Galway, with the help of youth worker Niamh Carroll, who made the topical video ‘How it Spreads!‘, winning €250. Judge Ferne Corrigan said “A very on trend piece about Covid-19 and brilliantly thought out with the use of green dust to show how germs can spread betwene us and surfaces. Short, sharp and on point. Well done to this group.” 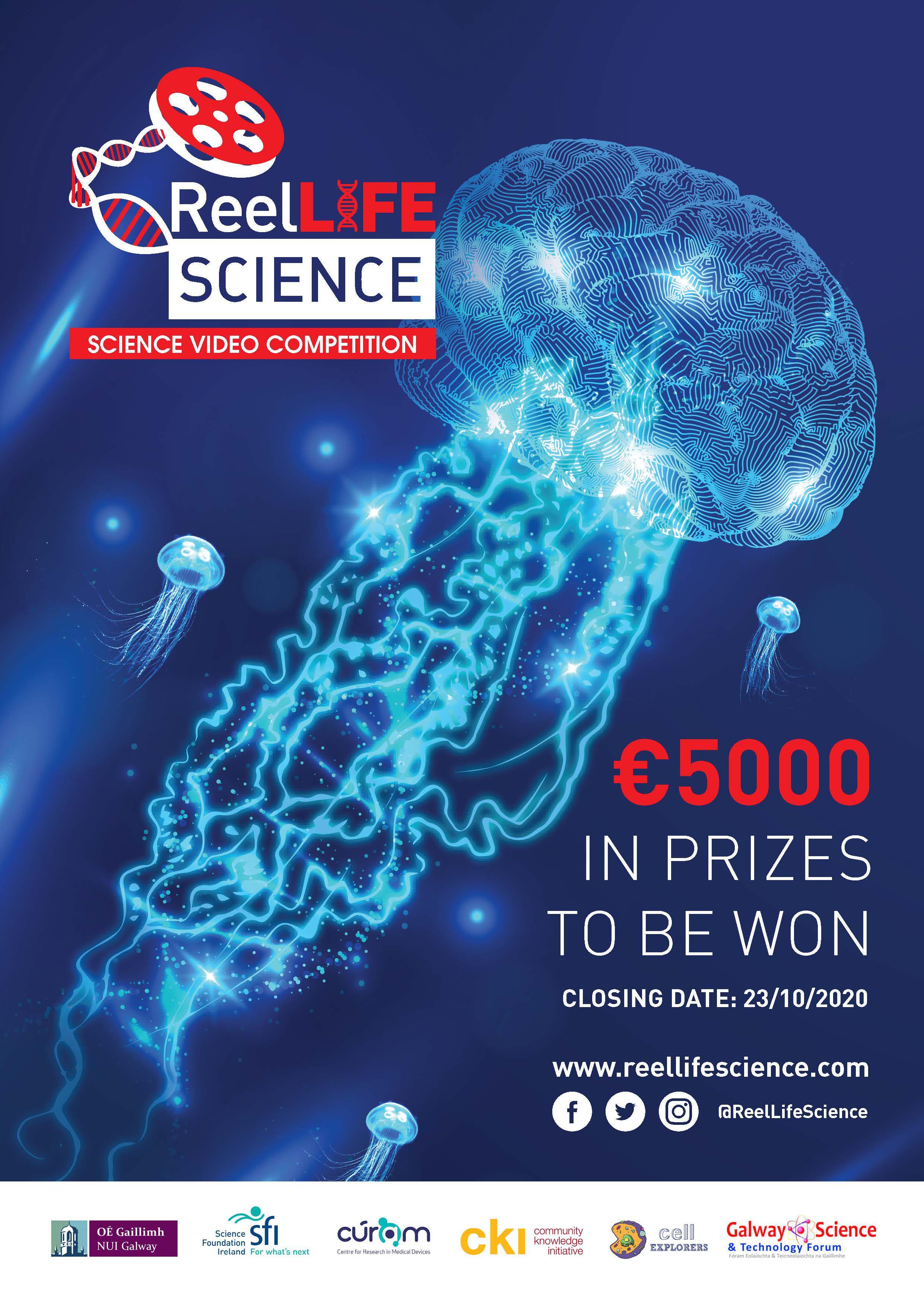