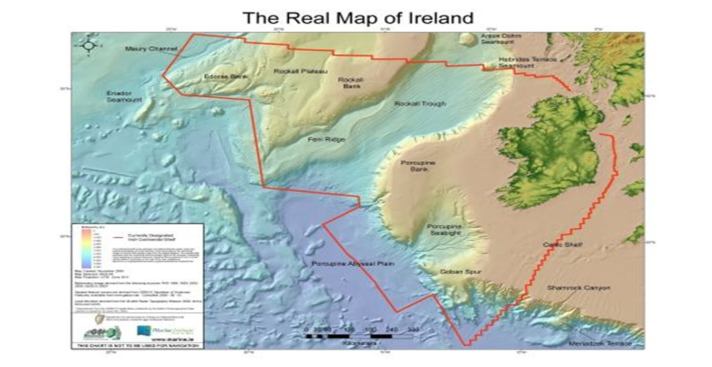 Image courtesy of the Marine Institute

Last week the Irish Whale and Dolphin Group published their Offshore Marine Mammal Atlas, which surveyed Ireland’s seas for whales, dolphins and seals. The Atlas took six years to complete, with researchers spending over 1,000 days at sea recording more than 3,300 sightings of 35,000 animals.

As you can see from the image above, Ireland’s seabed territory extends far into the Atlantic Ocean, but also contains part of the Irish and Celtic Sea, and taken together is called the “Irish Continental Shelf”. The island of Ireland covers 20,863,360 acres of land but can claim a marine and undersea territory over ten times greater than that, at a staggering 220 million acres. The UN Convention of the Law of the Sea grants Ireland the sovereign right to explore this area and to exploit its natural resources.

Image courtesy of the Marine Institute

The marine mammal survey took over 5,000 hours of survey effort and was carried out on a variety of vessels, including research vessels (e.g. R.V. Celtic Explorer above), naval vessels (e.g. LE Roisin) and even car ferries (e.g. MV Ulysses). Researchers searched the seas ahead of the vessel by eye and using binoculars, typically on the deck but also on the “monkey island” (i.e. on the roof of the bridge) and the “crow’s nest”. Weather conditions and position data were automatically collected by the ship’s onboard computers and GPS.

The term “Cetacean” is used to group whales, dolphins and porpoises, and 19 different Cetacean species were observed in Irish waters. Some of these species, including sperm whales, pilot whales, common dolphins and harbour porpoises were described as being “widespread and abundant” in Irish seas. 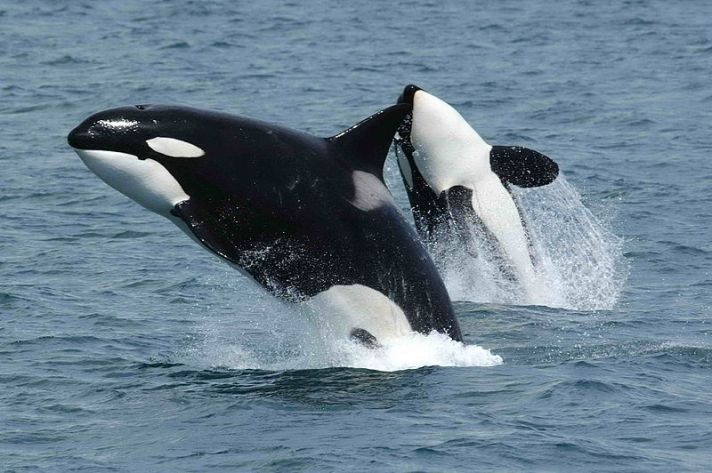 Perhaps more surprisingly, other cetacean species such as the Killer Whale, Humpback Whale and even the mighty Blue Whale were observed off the Irish coast. Killer Whales were sighted (video) all year round, mostly inshore around bays and islands, where they feed on other marine mammals and fish. Humpback Whales were sighted (video) between June and February, when they use these waters as their summer feeding grounds, before migrating to their winter breeding grounds. Blue Whales, the largest animal to have ever existed, are rarely seen in Irish waters, with just two sightings in six years, probably en route to their tropical breeding grounds after feeding off the coast of Iceland.

As well as Cetaceans, the survey observed two species of seals, the Grey Seal and the smaller Harbour Seal. There are thought to be about 5,000 Grey Seals living around Ireland with an estimated 2,900 Harbour Seals.

What is ReelLIFE SCIENCE?