In 2014, students from Sooey National School, Co. Sligo, were awarded First prize at Primary school level, for their brilliant video ‘The Secret Life of Honey Bees’.

The video was produced by Fifth and Sixth class students, with the help of their teacher Thomas Egan. Special Guest Judge Professor Stephen Curry commented: “Sooey National School’s video had good science content, with a very, very funny script and the kids were clearly having a lot of fun which makes the film hugely appealing.”

On learning that their video had been selected by our Guest Judges as the best Primary school Science video in Ireland, Thomas told us “In 15 years of teaching I’ve never seen a reaction like it when I announced that they’d won. Fantastic!”

After the excitement, came the fame, when ‘The Secret Life of Honey Bees’, alongside the Secondary school winning video, ‘The History of Medicine‘ (made by Leaving Certificate student Julien Torrades of Summerhill College, Sligo), was featured on the RTE2 NewsDay TV programme.

Next up for our intrepid filmmakers was a trip to NUI Galway on Nov 23rd to the Galway Science and Technology Festival to see their videos on display to the public, along with their families and friends and the other prizewinning schools.

Then it was a quick dash over to the Award Ceremony to pick up their certificate and cheque for €1000, presented by Dean of Science Prof. Donal Leech. 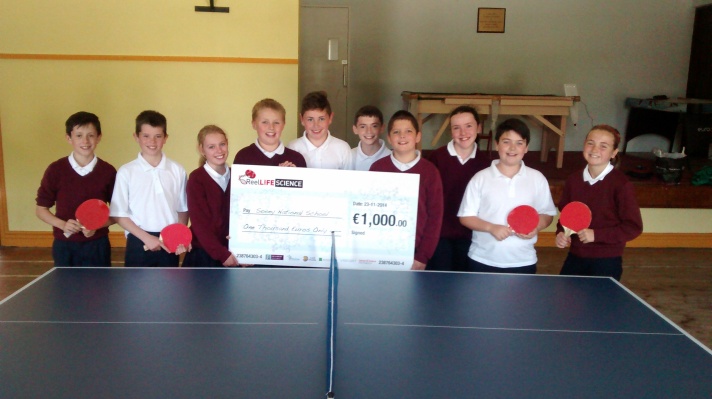 We heard from Thomas and the gang in Sooey recently and were delighted to hear that their prizemoney was put to good use:

“Our original intention was to spend the money from the award on Science equipment but given the fact that our school is like a construction site (a good thing!) for the past while and adequate storage is an issue, we splurged on two table tennis tables, a resource which can be enjoyed by the entire school and concrete evidence for our prizewinners of the merit of their achievements!

We also participated in the Something Fishy project – it was a very busy year – and made a longer documentary about that. I don’t think that anything came even close to the excitement of the day I announced that we’d won the overall prize though – a magical moment. My 6th Class this year – last year’s 5th, who participated in the video – still demand that we show the video to all visitors to the school! Wonderful competition and we’ll endorse it in any way that we can – I have a feeling it’s going to be even bigger for you this year.

Best of luck with it all again.

Check out Sooey NS’s website, if you would like to find out more about all the great things they are involved in.

If you would like to take part in ReelLIFE SCIENCE 2015 and be in with a chance of winning €1000 for your school by making a fun Science video, you can find out more at www.reellifescience.com. Closing date is Friday October 16th!

What is ReelLIFE SCIENCE?